The CCCA Committee have reviewed the situation.

It is too early to cancel this event in the event of Covid Lockdowns being eased further in order for visitors to access campsites  hotels etc. which are closed at present.

A decision will be made whether or not to cancel the event nearer the time.

Cody Sailing Club invite members of the CCCA to join us for the following cruising events in 2020.

https://www.codysailingclub.co.uk/a/pooleharbourcamp2020/ is a 5 day event at which members of the CCCA can choose to camp, or daysail with us.

An informal meeting was held at the Nationals this year to discuss the way forward with the Trio class  developments.

Read the minutes of the meeting <—

Pictures from Llangorse Inlands 5-6th May 2018

Cody Sailing Club are delighted to have teamed up with CCCA to offer two Solent based fleet dinghy cruises in the summer to CCCA members. Cody have planned a sail from Lymington to Newton Creek on the Isle of Wight, and a sail from Stubbington to Bursledon.

All two or three person Comet boats are welcome on these cruises. There are some cruises, beach days, and daysails from our camps which suit single handed vessels better.

Please see details for the events

We will need to cap the numbers to about 6 boats from CCCA at each event, and we need to know the contact details for everyone who is planning to attend as we decide at the last possible moment whether to sail or not, which may be the evening before or 6am on the morning of the event if the weather is marginal.

To let us know what we need to know in order to plan the cruise, the information required is at http://www.codysailingclub.co.uk/a/attending-a-fleet-dinghy-cruise/  Mail ccca_cruise_planning@codysailingclub.co.uk with these details to register interest.

We will facilitate the daysail, in that we will organise a group of people together who may make the independent choice to sail from the same location at roughly the same time to the same destination, and then return together. At all times the skipper of the vessel is responsible for the vessel itself and has a duty of care to their crew. They take the decision to sail for themselves.

We will look out for each other, and if someone gets in difficulty we will all stop, gather together, and render assistance as proportionate to the situation. We may provide direct assistance to others, and help to ensure that the right decisions are taken to maximise safety.

I’m the Advanced Organiser for both these events, so if you are interested in joining us please contact me for more information.

A fantastic event once again hosted by Exe Sailing Club

The latest Comet Trio rules are available reflecting the changes to the boat voted in favour in July 2017. 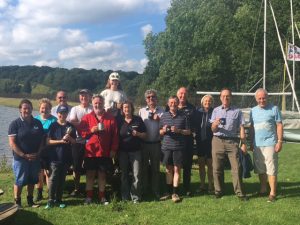 Sunshine, Force 2 slightly shifty winds and 8 Comet Duos – the perfect combination for the 2nd World Championships of this class which despite only 175 being built (the last nearly 20 years ago) – is still active and is particularly suited to smaller waters like Cransley.  With 6 locals and 2 visitors (Stephen Linton/Gerry Mogg from Hawley Lake SC and Nigel and Ann Ford from Oulton Mere SC) there was a friendly huddle at the hugely starboard biased startline in Race 1.  Last years winner Nigel Austin and his new crew Charlie Guyett (103) failed to break through the resilience of Peter Stein (99) and John Linnell and Emily Britton (90) and was nearly beaten by Jane Townsend (73) who sailed a blinder.  The remainder of the fleet (Sarah Austin/Sue Bull, John Townsend and the visitors) were still finding their feet but with close racing and much changing of places all enjoyed a fantastic lunch of chicken casserole with an air of anticipation still in the air.

Lunch provided Nigel and Charlie with a chance to rig the boat properly (mast shrouds horribly uneven and the original blown out sails were a feable excuse though), and the 2nd race saw the fleet start much cleaner (albeit John and Emily were horribly leebowed by Nigel and Charlie which clearly put them off their stride).  The result saw a return to winning ways for 103 and with Peter in 2nd, it meant that the final race was the decider.  However in true Cransley style, the fleet retired for afternoon tiffin on the verandha before that – very civilised, not a sniff of a protest in the breeze!.

The third race saw Stephen and Gerry master the conditions before being overhauled by Nigel and Charlie, then Peter, and John and Emily.  Despite the winds being ideal, there was an occasional freak gust and usually it saw John Townsend fill up with water, but cruelly one such blast tipped his wife Jane over in front of him, shame on you sir for leaving her in the water at the mercy of the fishermen as she drifted towards their swims!!.

A great days sailing was had by all though.  If you have a Comet Duo why not plan your fitness regime to peak about the beginning of July 2018 for the next championships, we’d love to see you!!…………….